In the minds of the Finns, Russia’s invasion of Ukraine has made Russia an untrustworthy neighbour. Their attitude towards their Russian neighbour is now very negative and they regard Russia as an unequivocally threatening and unpredictable dictatorship. Ordinary Russians are not accused of the grim developments, however, and Finns still hold them in high regard. 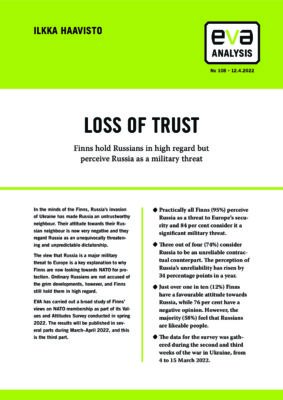 Finns hold Russians in high regard but perceive Russia as a military threat. The Analysis is written by Research Manager Ilkka Haavisto. 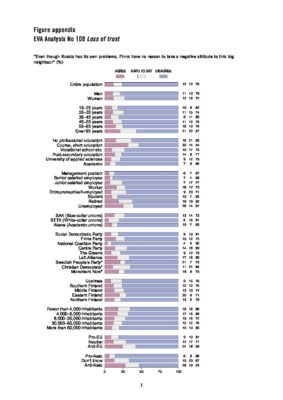 The attack on Ukraine has changed the Finns’ perception of Russia to very negative. Only 12 per cent feel that there is at present no reason for Finns to have a negative attitude towards their large neighbour despite Russia’s own problems. Three quarters (76%) have a negative view of Russia (Figure 1). The increase in the negative attitude towards Russia has been exceptionally quick, extensive, steep and broad-based. The proportion of those with a positive attitude towards Russia has plunged from the previous year’s figure, and the share of Finns with a negative attitude has grown by 31 percentage points. The proportion of those who took a very negative stand (“completely disagree”) nearly tripled from the previous year. In all population groups, a clear majority has a negative view of Russia, and there are very few who have a more understanding view (see Figure Appendix).

Russia’s invasion of Ukraine marks an end point for Finns’ trust in Russia. For many years, opinions about Russia were cautiously hopeful. In the first years of this millennium, a clear majority of Finns thought that Finns have no reason whatsoever to have a negative opinion about Russia.

Finns have not been naive about Russia, however. EVA’s Values and Attitudes Survey has regularly indicated a dip in the positive regard for Russia at times when events in Russia or Russia’s actions around the world have appeared negative.

The turning point in attitudes dates back to 2012, when the Finns were more positive about Russia than ever before or after. Later in the same year, Russia’s President Vladimir Putin began his third term as president and the Russian government started to take stronger action against civil society and movements calling for democracy. Protests calling for free elections were suppressed, and Russia enacted a law restricting the activities of non-governmental organisations (NGOs), and in the following year, it enacted another law that restricted the rights of sexual minorities. The harsh policies of the beginning of Putin’s third term also affected Finns’ attitudes, increasing their reservations towards Russia year by year.

Other important events that have reinforced the negative attitude since 2012 include the military action initiated by Russia in Ukraine in 2014 and Syria in 2016 and the attempted assassination of opposition politician Aleksei Navalnyi in 2020. The accumulation of other negatively perceived action taken by Russia and the continual erosion of Russia‘s own democratic and human rights progress are also likely to have contributed to the decline of positive attitudes and the increase of negative ones with regard to Russia.

Russia is perceived as a threat

This massive shift in attitudes is the result of Russia’s invasion of Ukraine, which has made Russia a real threat in Finnish minds. A sense of perceived threat from Russia is evident in the series of questions in which Finns are asked to evaluate fifteen characterisations according to how well they correspond to their own opinions about Russia (Figure 2). The views on Russia are mainly very grim. Over 90 per cent of Finns consider Russia an unpredictable dictatorship whose desire to expand threatens world peace. Very few people recognise a good neighbour in Russia anymore. Instead, the overwhelming majority feels it is a significant military threat. Only six per cent believe that Russia is a developing and increasingly affluent country.

Despite the threat posed by Russia, it is easy to see that Russians and their culture are held in high regard. A clear majority of Finns consider Russians to be likeable, and the majority have high regard for Russian culture. These views reflect the sympathy felt by Finns for the Russian civil society. Finns believe that the Russia’s problem is not its people, but its leaders. A corresponding series of questions was also presented in the EVA Values and Attitudes Survey in 2005, 2015 and 2021, which enabled a more detailed assessment of the attitudes towards Russians over both the short and a longer term.

Almost all Finns (94%) consider Russia to be unstable and unpredictable. (Figure 3). Although the majority of Finns have considered the Eastern neighbour to be unstable previously, this feeling has very dramatically grown stronger and become more contrasted since Russia invaded Ukraine. At the same time, it has become clear to Finns that Russia is truly prepared to engage in a war of aggression to expand its sphere of power. Of the respondents, 92 per cent consider Russia to be an expansive superpower and in practice, nobody disagrees. In the past, the perception of Russia as an expansive country was not considered to be very credible. In 2005, only a third (34%) considered Russia to be an expansive superpower and nearly as many disagreed.

Finland became independent from Russia 105 years ago and twice repelled the Soviet Union’s attempts to invade it in the Second World War. In addition to Belarus, which is considered to be Russia’s satellite state, and Ukraine, which is currently under Russian attack, Finland is now Russia’s only militarily non-aligned western neighbour.

Perhaps this is why Finns believe that Russia’s aggression could also extend to Finland. The vast majority (84%) of Finns regards Russia as a major military threat and only six percent disagree. The proportion of those who perceive Russia as a significant military threat has increased substantially in only a year (25 pp.).

For Finns, the alarm bells already started to ring when Russia occupied Crimea in 2014 and launched the war in Eastern Ukraine. EVA’s 2015 Survey of Values and Attitudes indicated a significant increase in the proportion of those who consider Russia to be a major military threat, and another substantial increase was indicated by the survey in spring 2021.

Finns’ perception of Russia’s current role in global politics is entirely negative. Only three percent of Finns agree with the characterisation that Russia “safeguards world peace, rather than jeopardising it” and 91 percent of Finns reject it. The figures have undergone a huge change since 2005. In 2005, 16 per cent of the respondents considered Russia a safeguard and a much smaller proportion (38%) considered it a threat to world peace. The Values and Attitudes Survey also collected information on Russia’s perceived threat with a seven-part series of questions, in which Finns were asked directly how threatening they currently perceive the actions of Vladimir Putin’s Russia. (Figure 4). The results were largely consistent with characterisations regarding Russia. Finns believe that the actions of Putin’s Russia are unequivocally threatening. In practice, everyone sees them as a threat to world peace (96%) and European security (95%). However, Russia is also considered a more direct threat. More than nine out of ten (92%) Finns believe Russia is a threat to the security of the Baltic Sea region. Almost as many (85%) believe that Russia’s actions pose a threat to Finland’s national security, and the majority (55%) believe that Russian actions under Putin pose a direct threat to their own security and that of their family and friends.

These figures explain why the clear majority of Finns (60%) are now in favour of Finland’s membership in NATO. According to the results of EVA’s Survey of Values and Attitudes conducted in spring 2022, a large majority of people in Finland believe that NATO membership would increase Finland’s military security and ability to counter the threat of Russia’s aggression. In the majority’s opinion, the alliance would also increase the Finns’ collective and personal sense of security.

Finns hold Russians in high regard

However, Finns’ strong perception that the actions of the Russian government are threatening does mean that they do not find anything good in Russia. Finns hold their neighbour’s culture and its people in very high regard. Nearly three out of four (73%) consider Russia to have a rich culture and just one in ten (9%) disagree. (Figure 5). These figures have remained unchanged since 2005. Although perceptions of Russia’s actions and the direction its society is developing have become very pessimistic, this has in practice had no effect whatsoever on how Finns perceive Russia as a country of culture. Despite the grim situation – or as a result of it – the Finns demonstrate sympathy towards ordinary Russians. A clear majority (58%) feel that Russian citizens are pleasent people, and less than one fifth (18%) disagree. The attack on Ukraine has not affected this. In fact, the proportion of those who hold Russians in high regard has increased somewhat from last year and is 10 percentage points
higher than in 2005.

These views are indicative of the very positive general attitude Finns have towards Russians. They suggest that despite the emotional turmoil caused by the war in Ukraine, the Finns are not very enthusiastic about stigmatising, let alone blaming, ordinary Russians for the actions taken by the Russian leadership and armed forces, which they consider absolutely reprehensible.

However, the sympathy for Russians does not extend to the Russian state. Just under a quarter (24%) think Russia has been misunderstood and is subject to groundless prejudice and fear, but the majority (53%) reject this claim. The change in attitudes that has taken place since 2005 indicates that Finns have become much less sympathetic and accepting regarding Russia. In terms of values and culture, Russia is also considered to have become more distant. Around one fifth (21%) feel that Russia is part of the European cultural sphere, but the majority (57%) feel that it represents different ideas and beliefs. For Europeans, the key values of democracy, freedom and equality have not taken root in Russia. The results of the Values and Attitudes Survey show that still in 2005, a large number of Finns (45%) saw Russia as a part of the greater European family. However, since then, the nascent hopes of a more European Russia have disappeared.

The results are based on the responses of 2,074 people. The error margin of the results is 2–3 percentage
points in each direction on the level of the entire population. The data were collected from 4 March  to 15 March 2022. The respondents represent the population aged 18–79 across all of Finland (excl. Åland). The material was collected in a Taloustutkimus Oy internet panel, from which the survey sample was formed through stratified random sampling. The material has been weighted so as to represent the population according to age, gender,
place of residence, education, profession or position, sector and party affiliation. The statistical analysis of the material was carried out and the graphics of the results created by Pentti Kiljunen at Yhdyskuntatutkimus
Oy. The results and their more detailed itemisations of by population group are available on EVA’s website. EVA has conducted the Survey on Values and Attitudes since 1984.

Finns hold Russians in high regard but perceive Russia as a military threat. The Analysis is written by Research Manager Ilkka Haavisto.

60 per cent of Finns support Finland’s NATO membership and 19 per cent oppose it. The proportion of those in favour of…
Lue lisää

There has been a sharp increase in support for NATO membership

Support for NATO membership has increased compared to a year ago. This change can probably be explained by a hardening of the…
Lue lisää