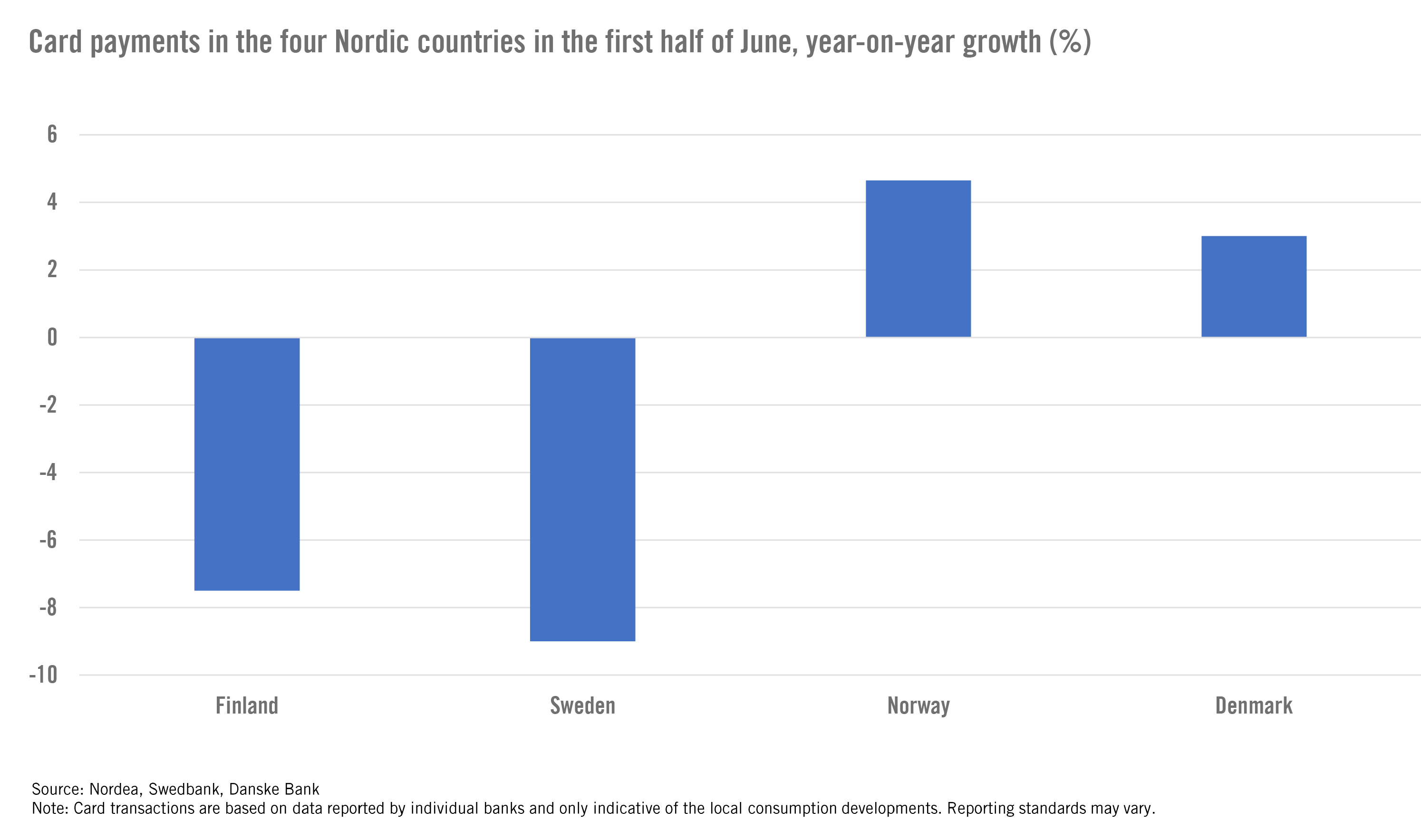 Figure 1: Through examining credit card data from Denmark and Norway, two countries that quickly implemented strict measures to fight the spread of the virus, a relatively fast recovery can be identified
2.7.2020

Nordic Economies and the Coronavirus Crisis: Why Fear Matters More than Restrictions

Easing lockdown measures is not enough to put the economy back on track. Instead, besting the fear of a spreading coronavirus will be crucial. This interpretation is supported by the economic developments of Nordic countries and growing scientific evidence, writes Sanna Kurronen, Lead Economist of EVA.

Despite resorting to much looser lockdown measures than its neighbours, Sweden’s economy has suffered just as much.

Nevertheless, through examining credit card data from Denmark and Norway, two countries that quickly implemented strict measures to fight the spread of the virus, a relatively fast recovery can be identified (Figure 1).

In Sweden, the initial drop in consumption was the smallest, with card transaction volumes falling around 15 per cent year-on-year in late-March and early-April, whereas in other Nordic countries the drop was between 20 per cent and 25 per cent. (More on the subject: this, this and this). However, the recovery has not been rapid in Sweden, as in the first half of June credit card payments were still roughly 8 per cent below the previous year. Like elsewhere, the demand for services is far below normal levels too.

As the virus is now well contained, the recovery has been swifter in the remaining Nordic countries. Latest numbers from mid-June show that purchases in Denmark were already topping those of the previous year, and even payments in restaurant were only 10 per cent lower than in 2019.

Sweden and Finland have already published monthly GDP indicators for April. Sweden’s GDP dropped by 7.3 per cent compared with the same month last year. For Finland, the year-on-year drop was 7.9 per cent.

Preliminary figures were better than feared in both countries. The service sector was more resilient in Sweden than in Finland due to restaurants remaining open, but production of services still fell by 8 per cent. In Finland, the corresponding figure was 10 per cent. The latest numbers for May, however, proved disappointing in Sweden, as sales in the business sector continued to struggle, suggesting that the economy may have done even worse in May than in April.

The worst effects will likely be seen in figures of the second quarter, although economic growth rates in Europe were horrific already in the first three months of the year.

This could prove to add challenges to the Swedish economy during the coming months, as cautious consumers reduce their consumption of services if COVID-19 continues to spread. Furloughed workers could end up unemployed if the economy continues to struggle. The outlook on employment is a severe threat to the Nordic economies and could bring a second-round drop to consumption, even though the countries have avoided the worst wave of unemployment through furloughs and wage support schemes.

Swift restrictions had an impact

Due to COVID-19’s delayed arrival to the north, and because of the subsequent possibility to react in an early phase of the epidemic, Nordic countries did not opt for the most stringent of lockdown measures. Of the four Nordic countries, Denmark and Norway imposed the strictest measures, closing schools and big parts of retail services, and by limiting meetings to ten people. However, unlike in many southern European countries, manufacturing and construction sectors continued to operate. Finland followed suit, but did not close businesses, apart from restaurants. Sweden kept schools open for children under 16, and allowed businesses to operate, settling for mere recommendations of social distancing in order to slow down the epidemic.

As the lockdowns took effect mostly in mid-March, they only had a limited impact on the first quarter’s GDP growth. The worst effects will likely be seen in figures of the second quarter, although economic growth rates in Europe were horrific already in the first three months of the year. Nevertheless, the Nordic countries were all above the EU’s average growth rates in the first quarter, partly because the pandemic reached the north later than it reached southern Europe, but also because lockdown measures were not as harsh due to manufacturing and construction sectors going largely spared (Figure 2). Figure 2: As the lockdowns took effect mostly in mid-March, they only had a limited impact on the first quarter’s GDP growth.

Already in April, Denmark was among the first countries to start removing restrictions by first opening primary schools and some retail services. As infections were at low levels, consumers soon returned to stores and restaurants. Next came Norway, followed by Finland a few weeks later by opening schools and services. Other Nordic countries have thus approached the Swedish model with continued social distancing and mild restrictions regarding e.g. group gatherings. As new infections are few in Norway, Denmark, and Finland, domestic demand is recovering rapidly.

As consumers are cautious regardless of the kind of lockdown rules, there is perhaps too much focus on the lack of heavy restrictions in Sweden.

As consumers are cautious regardless of the kind of lockdown rules, there is perhaps too much focus on the lack of heavy restrictions in Sweden. Much like in Sweden, Japan’s constitution does not allow for mandatory lockdowns. Nevertheless, unlike Sweden, Japan has made the suppression of the epidemic its goal and has managed to save lives through this strategy. Swedish health authorities have insisted, despite mounting evidence from all over the world, that COVID-19 is not that deadly and has settled with a strategy to mitigate the epidemic. This has led to a death toll seven times higher than in its Nordic counterparts, relative to the size of population. Therefore, even though differences in economic performance between the Nordic countries this far into the pandemic are small, Sweden has paid a heavy price in terms of human lives.

Internationally, evidence is mounting in favour of it not being the lockdown measures that are hampering the growth of consumption, but rather the virus itself. In the US, states that have removed lockdown measures before the virus is under control have not managed to revive their economy  (and this). High-income consumers, in particular, stay at home, probably because they have the possibility. If the virus is spreading, consumers restrict their own behavior as they try to avoid getting infected or infecting others.

In terms of economic recovery, domestic consumption cannot win the war by itself. Countries, that heavily rely on exports for their livelihood, are crucially dependent on the rest of the world also tackling the spread of the virus.

Country specific policies in small open economies like the Nordic countries have little or no effect on global demand. The automotive industry has been hit hard in Sweden, imminently impacting industrial production. While Finnish production is focused on investment goods, meaning that the biggest economic effect is likely to show with a delay, Norway is struggling with low oil prices hampering the outlook on investments. Denmark has the most defensive industrial structure, with pharmaceuticals and agriculture playing a significant role, but demand within its important trade partners in Europe has suffered from severe lockdowns.

At a ratio of 56 per cent for goods and service exports to GDP for Denmark, 47 per cent for Sweden, 40 per cent for Finland, and 37 per cent for Norway in 2019, all countries have a sizeable export sector. This underlines the importance of external demand. Large markets in the US, EU and China are particularly important export destinations. Domestic lockdown measures that are introduced to non-tradable goods that require physical interaction, do not make a big difference for the export sector. What matters is global demand.

In April, all the Nordic countries experienced a 20-30 per cent drop in the value of goods exported, but, again, the Nordic countries were not even close to being among the worst performers (Figure 3). Countries like Italy, with a full lockdown, suffered as even the manufacturing sector was largely shut down. World trade is expected to fall by close to 30 per cent in the second quarter of 2020 and around 20 per cent for the full year 2020. No matter the response to COVID-19, all economies are suffering from at least two things: plummeting global demand and fear. This explains why the Swedish economy is doing no better than its Nordic counterparts.

It will likely take at least a couple of years before we can determine which approach was the most effective in the battle against the coronavirus and in keeping people safe while protecting the economy at the same time. Currently it seems as if the Nordic economies have all suffered somewhat equally, while the Swedish strategy has also led to a higher death toll.

The economic outlook in the Nordic countries will remain uncertain and dependent on global developments. Regarding the domestic economy, out of those who can, consumers will stay at home if fear persists. Based on current knowledge, the best thing for the economy would be to keep infections so low, that people can work and consume without fear.