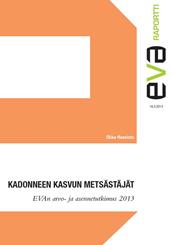 Finns’ attitudes towards EU membership have remained fairly positive. Nearly half (46%) of the respondents relate positively towards EU membership, one fourth (27%) neutrally and another fourth (25%) negatively. Although support for membership has declined slightly from last year, the result is the second most positive during Finland’s membership era. Every second Finn supports the euro as well. All these results become clear from the fresh Attitude and Value Survey of the Finnish Business and Policy Forum EVA.

EVA’s 2013 Attitude and Value Study focused on the public perception of structural reforms aimed at strengthening economic growth. The results indicate that the Finns are fairly ready to boost growth through such measures. At the same time people are strongly against austerity measures and cuts in public service expenditures.

Half of the Finns (50%) would accept raising the retirement age by at least two years to 65. Almost one in two (45%) accept a significant cut in corporate income taxes. The majority (53%) would also reduce the earned income taxation.

The report Kadonneen kasvun metsästäjät was published March 19, 2013 and is part of the series of EVA’s value and attitude research studies on the EU, started in 1984. It has been written by Mr Ilkka Haavisto from EVA. The following summary includes a few of the main results selected from the wide-ranging study. The report (in Finnish) can be read in its entirety on EVA’s website www.eva.fi.